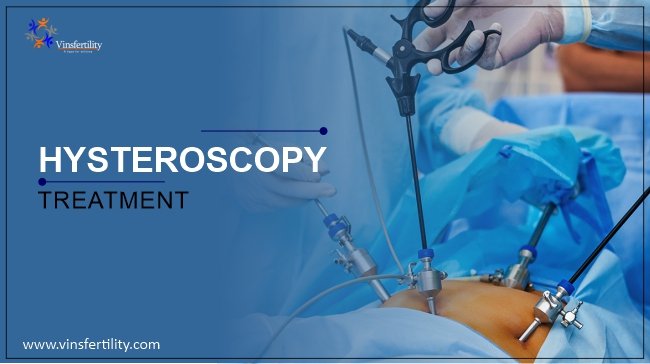 Hysteroscopy is a medical procedure done to examine the inside of a woman’s uterus (womb) to diagnose and treat the issues found inside, such as abnormal bleeding, fibroids, polyps, adhesion, etc.

Hysteroscopy for infertility is done to diagnose and treat the cause of repetitive miscarriages and not being able to get pregnant.

For Hysteroscopy, a thin and flexible telescope with a light and camera at the end known as a Hysteroscope is inserted into the uterus through the vagina and cervix. Images of the uterus are displayed on a screen, which allows the doctor to have a clear view of the inside (womb). In case of a treatment, other instruments are used with the hysteroscope.

Why is Hysteroscopy for infertility done?

There are various reasons, due to which a woman might get a Hysteroscopy done. It may be required for-

Finding the cause of abnormal bleeding is one of the most common reasons for getting a Hysteroscopy done. Abnormal bleeding could mean- long and very heavy periods, bleeding between periods, postmenopausal bleeding (bleeding after menopause)

To treat abnormal bleeding, the uterus lining is destroyed with the help of a procedure known as endometrial ablation, which requires the use of hysteroscopy along with other instruments.

What is the procedure of Hysteroscopy?

Hysteroscopy is done on an outpatient, which means that the patient is not required to stay overnight at the hospital. The procedure might take 10 minutes or one hour depending upon whether it is being done for just diagnosis or treatment.

After getting Hysteroscopy, you can go home soon, but if you had a treatment and were given general anesthesia, you might have to stay at the hospital for a couple of hours.

What are the risks involved in Hysteroscopy?

Generally, Hysteroscopy is a safe procedure, however, like any other medical procedure, it comes with some risks and complications. And the risk increases if a treatment is performed along with the diagnosis. The risks are-

You might also experience minor vaginal bleeding and cramps for not more than 2 days after Hysteroscopy.

In case you get a high fever, heavy bleeding, severe pain in the abdomen, post-procedure, you should immediately call your doctor or go to the hospital.