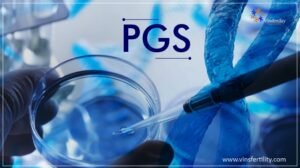 PGS- Preimplantation Genetic Screening is an advanced technology used for patients who have chosen IVF (In Vitro Fertilization) to have their biological child. It is a genetic testing procedure done to increase the chances of a successful pregnancy. In PGS, embryos are tested for chromosomal abnormalities before being implanted into the uterus of the woman.

A normal human has 23 pairs of chromosomes, however, a couple who opts for IVF to conceive, is more prone to having abnormal chromosomes, because as they age, the quality of their eggs and sperm decreases, increasing the chances of resulting embryo having extra or missing chromosomes. In such a case, the embryo will not implant itself in the woman’s uterus or she is most likely to have a miscarriage later, and even if full-term pregnancy is achieved, the child born will have health conditions like- Down syndrome, Turner syndrome, Trisomy 13 or more. These conditions can be discovered in PGS.

How does PGS work?

PGS helps in preventing irregular pregnancy by screening the embryos for aneuploidy (irregular number of chromosomes). The technique used for PGS is more precise than the visual microscopic observation generally used during IVF. In PGS, a small number of cells (4-10), which contain chromosomes are removed from the embryo and sent to the genetic lab for chromosomal testing.

This test is mostly done to select the embryos with a normal number of chromosomes to escalate the probability of delivering a healthy baby. Once an embryo with the correct number of chromosomes is selected, there will be no need to implant more than one embryo, which will reduce the chance of multiple pregnancies.

How is PGS performed with IVF?

In the lab, once the eggs have been fertilized for IVF, the embryos are allowed to divide into multiple cells for almost 5 days. These embryos are then genetically screened via PGS. The process is as follows-

Who should get PGS done?

PGS is recommended for those who have a high risk of having embryos with abnormal chromosomes. Such as-

What are the risks involved in PGS?

Doctors of Reproductive Medicine have been performing PGS successfully over many years. And if done by a highly trained and experienced doctor, there are minimal or no risks involved in PGS.

However, there are certain cases, in which PGS could be harmful, such as-